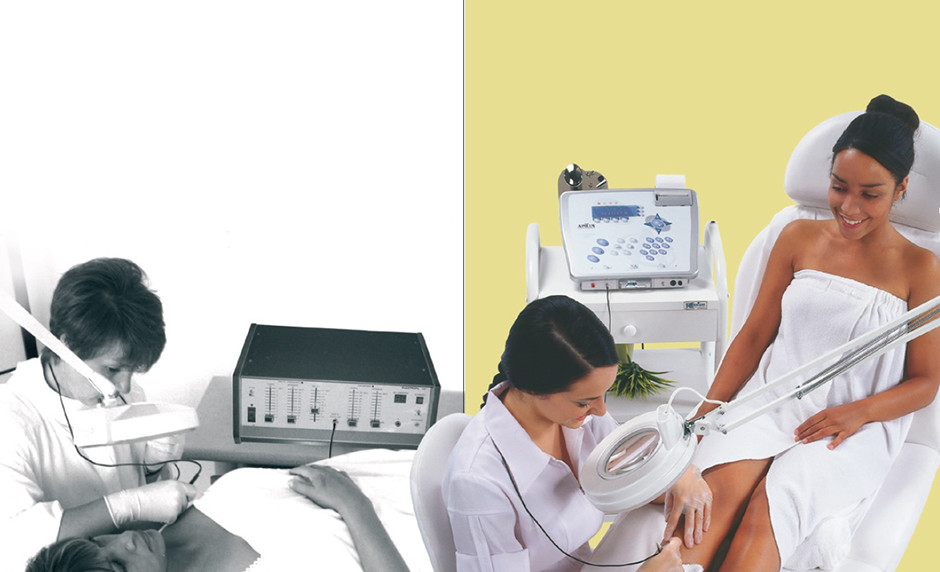 From the very start in 1869, electrolysis has know a great evolution. It has evolved from pure electrolysis, to thermolysis, to a combination of the two currents (Blend) and finally to the use of ultrarapid and comfortable currents using the 27 MHz frequency. Thanks to a series of technological breakthroughs, the limits of this permanent hair removal method were pushed back further and further, thereby enabling electrologists to offer excellence to their clients. To refresh our memories and bring us up to date, here is a brief overview of the evolution of electrolysis and a summary of various electrolysis techniques, from then to now.

In 1869, Charles E. Michel, an American ophtalmologist, discovered that by connecting a fine needle to the negative pole of a source of galvanic current and by inserting the needle in the follicle of an ingrown eyelash on one of his patients, he was able to destroy hair. The official birth of electrolysis as a hair removal technique took place in 1875, when his results were published. ollowing experiments on human tissues in the early 1890s, the Frenchman Dr. Jacques d’Arsonval discovered that high-frequency current could produce heat and destroy hair roots. In 1916, professor Paul Kree developed an electrolysis technique (galvanic current) using multiple needles, which was used for many years. In 1923, a French doctor, Henri Bordier, wrote on the possibility of performing electroepilation using a high-frequency current. This theory was put to the test in 1938 by Dr. Peytoureau. He used a short wave radio emitter to perfect the thermolysis process, whereby hair albumin is coagulated to bring about its destruction.

In 1948, a patent was granted to Henri E. St-Pierre and Arthur Hinkel for the invention of the “Blend”, a combination of galvanic and high-frequency currents (also called “combined currents”). At the time, mixing the two currents offered a more effective solution to permanently eliminate hairs. With the advent of the “Blend”, pure electrolysis (technique using galvanic current alone) was set aside.

DECTRO is a Canada-based company, founded in 1978, devoted to the design and development of highly innovative hair removal and aesthetic care technologies.

Hair Removal for Teens: Which Method to Choose?