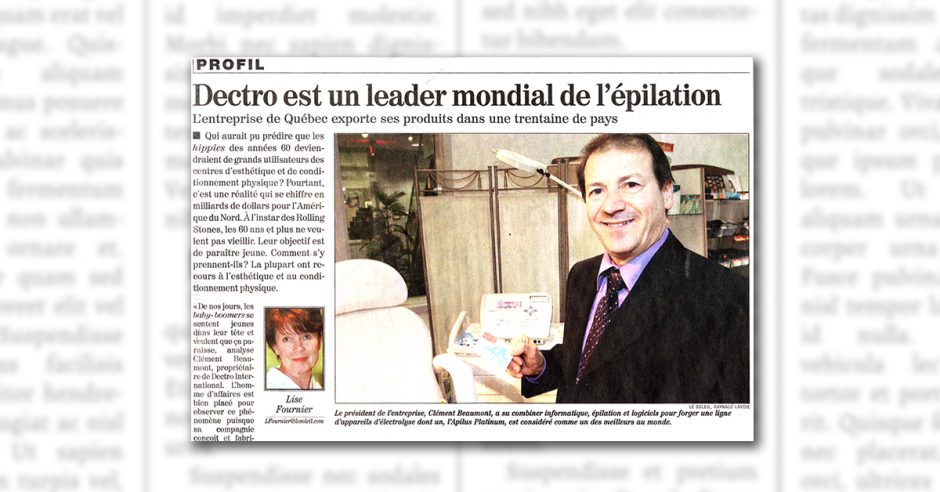 In our last blog post we went through a brief overview of the 30-year history of APILUS, Dectro’s flagship brand. Yet there is another interesting story to tell, of what went before APILUS. So how and why did this spirit of innovation arise in the first place?

For those of us who work in the field of beauty and hair removal, the name of Clément Beaumont is held in high regard. But very few know how he got involved in electrology, and what made him so passionate and vocal about it. This vocation, like every so often, was the result of happenstance, of being at the right place at the right time. While on the lookout for business opportunities, Mr. Beaumont (together with his partner Mr. Denis Bourgault), decides to buy Dectronique a Quebec City company specialising in the manufacture of electrolysis machines. Both men quickly realize through market research the huge growth potential in the computerization of such devices. We are in 1984 – at the onset of the age of the personal computer, which would soon be revolutionizing our day-to-day life.  Mr. Beaumont, an electronics whiz and born tinkerer, is right at home. Both him and his partner give themselves the resources to accomplish their stated aim, and thus surround themselves with like-minded, experienced engineers. Only five years later, in 1989, they release the Electropil: the very first APILUS computerized electrolysis device.

As they set their sights on the international market, both men soon understand, however, that for further innovation to be made possible, a two-pronged strategy needs to be followed, first by through further medical research on the topic, and then by the establishment of a suitable educational framework. In order to give scientific credentials of electrology, two studies are conducted (in 2005, and in 2013), in partnership with Laval University and the LOEX Research Center in Quebec City. The insight gleaned from the results of these two scientific endeavors enables the team to better understand the fundamentals of hair growth and to develop better tools, such as isolated probes. When used in concert with ever developping technology, they help enhance the performance of definitive hair removal treatments. Research also grounds the all those efforts in verifiable, empirical evidence. In a market sometimes prone to exaggerated claims, such a scientific seal of approval is also precious, and helps foster the reputation of the discipline.

The Académie Dectro, for a thriving profession

Mr. Beaumont realizes early the need to equip the profession with a high-level educational structure, whether to offer further training for professionals, or to ensure the spread of the best practices among newcomers. It is with this mission in mind that the Académie Dectro is founded in 1991. With the Académie, the discipline now had the top-level institution it deserves.

Sometimes passion pounces on us unawares; and so it was with Mr. Clément Beaumont and electrolysis. In discovering what computer-assisted circuitry could offer electroepilation, he embarked on a grand adventure, one that is still being written to this day. It is this very adventure that drives him still forward, and us with him, to go beyond the boundaries, for ever more efficient and comfortable electrolysis treatments.

Apilus at 30: Pushing the Boundaries in Permanent Hair Removal